One Year Lived written by Adam Shepard is a story about travelling in different countries around the world. Adam hopes his story will inspire others to get out and arm themselves with a broader perspective. 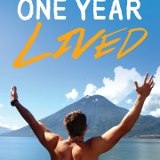 The book is a compelling intro to places you want to go. You can buy the paperback just published at Amazon.com for USD 15.95 or get the full ebook version for free here by sharing this blog post within 48 hours.

From late 2011 to late 2012, spending just $19,420.68, less than it would have cost him to stay at home, Adam visited seventeen countries on four continents and lived some amazing adventures. “It’s interesting to me,” he says, “that in Australia, New Zealand, South Africa, Europe, it’s normal for people to pack a bag, buy a plane ticket, and get ‘Out There.’ In the U.S., though, we live with this very stiff paradigm—graduate college, work, find a spouse, make babies, work some more, retire—which can be a great existence, but we leave little room to load up a backpack and dip into various cultures, to see places, to really develop our own identity.”

His journey began in “the other Antigua”—Antigua, Guatemala—where Adam spent a month brushing up on his Spanish and traveling on the “chicken bus.” During his two months in Honduras, he served with an organization that helps improve the lives of poor children; in Nicaragua, he dug wells to install pumps for clean water and then stepped into the ring to face a savage bull; in Thailand, he rode an elephant and cut his hair into a mullet; in Australia, he hugged a koala, contemplated the present-day treatment of the Aborigines, and mustered cattle; in Poland, he visited Auschwitz; in Slovakia, he bungee jumped off a bridge; and in the Philippines, he went wakeboarding among Boracay’s craggy inlets and then made love to Ivana on the second most beautiful beach in the world.

His yearlong journey, which took two years to save for, was a spirited blend of leisure, volunteerism, and enrichment.

Adam has agreed that if you share this post with your friends within the next 48 hours you will get his complete ebook “One Year Lived” of 284 pages for free in your preferred format from Tax & Money Havens. This deal is now closed.

The European Commission has sent reasoned opinions to Belgium, Denmark and the Netherlands, requesting that they change their exit tax rules on companies that transfer their seat or assets to other member states.

The Commission considers these provisions to be incompatible with the freedom of establishment provided for in Article 49 of the Treaty on the Functioning of the European Union (TFEU). A similar case against Sweden has been closed, following compliance by the Swedish authorities.

The Commission has called on the aforementioned countries to amend the following provisions:

The Commission considers that such exit tax rules are likely to dissuade businesses and companies from exercising their right of freedom of establishment and constitute restrictions of Article 49 TFEU.

The Commission’s opinion is based on the Treaty as interpreted by the Court of Justice of the European Union in De Lasteyrie du Saillant, Case C-9/02 of March 11, 2004, and in N, Case-470/04 of September 7, 2006, and on the Commission’s Communication on exit taxation of December 19, 2006. The immediate taxation of accrued but unrealized capital gains at the moment of exit is not allowed if there would be no similar taxation in comparable domestic situations. It follows from the case-law that the member states have to defer the collection of their taxes until the moment of actual realization of the capital gains.

The Commission had already referred Spain and Portugal to the Court of Justice for similar exit tax rules, and sent a reasoned opinion to Sweden,

Go to “Incorporation Service” and fill out the form.